“Oh yes, that’s super important,” this product marketer said to me, referring to the position of the bottle of shampoo on the shelf.

Hum, I thought to myself. How important is important? As more and more brands work to connect with their customers and employees, there is an inevitable need to establish significance or meaning in what we are doing and selling. Yet, as I discussed with Jeremy Waite, in his new book, “From Survival to Significance,” what is significant to one person may not be so for someone else. Significance and meaningfulness is personal and subjective… at least, to a degree. That is to say that there are some things that are contextually important, but in the bigger scheme of things, may have little importance whatsoever, as in the case of the shampoo bottle above. But, is there something as honorable as true significance that is absolute and universal? 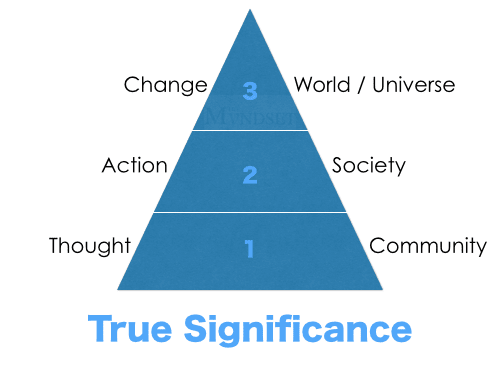 From my point of view, significance is defined by the ability to bring about change. The intention and result of that change are where the value lies. {♺}

When a company brandishes a mission statement across its entryway or in its annual report, this is the result of an intention. The thought is purposeful and penned. It is, presumably, positive. As such, the purpose is articulated and being shared. To the extent the purpose resonates, the next step is  making it come alive through actions and, more subtly, via behavior. However, the ultimate purpose of a brand is to bring about real impact and change. When brands have a strong purpose that helps shape and change its constituents, then I would tend to qualify that as true significance. The scale and scope of that significance is not as important as the depth and force of the change that is brought about. That said, purpose that aims to tackle the bigger questions are, by definition, more monumental. Some companies have the might and scale. But, the most important element is the integrity and authenticity with which the company approaches and activates its stated purpose. Purpose can only work when it is inside-out… 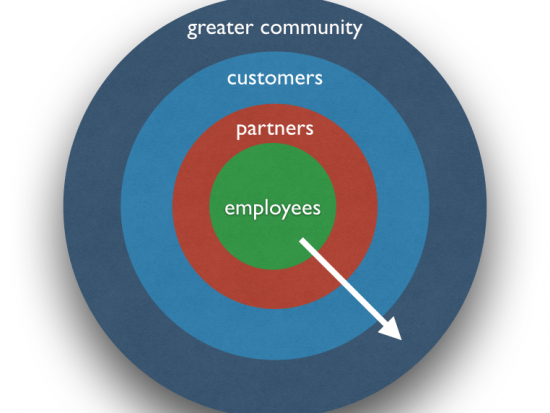 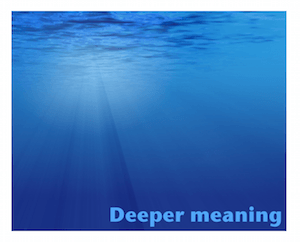 Many companies plod along without concerning themselves with a real brand or a purpose other than making money. It can seem more about hand-to-mouth survival (as Jeremy so rightly puts it). These are companies whose logos and mission statements (if they exist) are empty and/or represent just platitudes. For me, these two cases do not register. While they probably encapsulate the vast majority of companies, they have not acceded even to the lowest level of significance. Then, there are brands that have established a purpose, yet with a smaller ambition. The scope of the purpose is calibrated, for example, around the local community. It’s not that the mission is not important, even significant. It’s just that the scale of the benefit is more constrained. This is what I would describe as Low Level Significance (level 1).

As companies grow, the resources and scope typically expand. The ambition of the company somehow should be reflected in the scope of the purpose. Not that initiatives cannot be delegated at the local level, but the bigger a company becomes, the more significant its purpose must become in order to carry its weight throughout the organization. Here, we can talk about brand missions to help the larger society, beyond just the local community. We are talking about purpose that is important, because it is in some way about improving the way people live. What holds this category back from the highest level is, most often, the intention and the link back to its business.

Brands who embrace purpose at the highest level are inevitably tackling the world’s bigger social, economic and earthly issues. Even some smaller brands have positioned themselves on “big” issues.  I love the case of Ben&Jerry’s, where they continue to affirm that “business has a responsibility to give back to the community.” B&J’s casual and honest mission is to “make the best possible ice cream in the nicest way possible.” What makes this impressive is that they are now part of a large conglomerate and have managed to maintain the more militant profile and personality (as witnessed by their very latest product which is called: Save our Swirled. When the purpose is explicitly at a higher plane, I would argue that we can talk about a true significance. In this context, I would argue that Apple’s mission under Jobs, which was about making the world a better place, was of a higher order. However, the mission statement that has been published since, under Tim Cook, smacks of a corporation, too proud of its own products. This statement can be found on the bottom of its PR releases on Apple’s investor relations site:

Apple designs Macs, the best personal computers in the world, along with OS X, iLife, iWork and professional software. Apple leads the digital music revolution with its iPods and iTunes online store. Apple has reinvented the mobile phone with its revolutionary iPhone and App Store, and is defining the future of mobile media and computing devices with iPad.

A company that can rally around a cause, a purpose that does not relate directly to profits has a likely probability of gaining traction and galvanizing people’s energies. The closer the mission relates to its business, products and profits, the less likely it will move people. Brian Solis wrote recently,

There are always exceptions. But, on balance, over the long haul and especially in today’s evermore transparent world, Brian is fundamentally right.

Moreover, as Yvon Chouinard, founder at CEO at Patagonia, has said,

It’s important to “…prove that it’s possible to do the right thing for the planet and still make a profit. After all, … there is no business to be done on a dead planet.”  (via Mother Earth News).{♺}

How important is this notion for you personally? Is your company on a course for long-term success with a high-level significance?