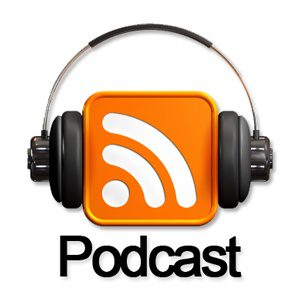 There seems to be a lot of evidence that the podcast* (digital audio file that you can download and listen on your preferred device) is booming. Yet, no one is really sure how many podcasts are there currently circulating in the world. Having been a podcaster myself since 2010, I have seen how the field has ebbed and flowed among my own listeners. As much as podcasting is, by nature, digital, it remains one of the murkiest zones in terms of bona fide data. Itunes is the largest repository of podcasts, but it remains opaque in terms of data.

Podcast by the Numbers

How many total active podcasts exist? My best guess is around 180,000. Wikipedia writes (no source) that there are now more than 115,000 English-language podcasts (which was exactly the number I used back in 2012). In my post, The Future of Podcasting, written in 2012, the numbers seemed to point to a total worldwide of 150,000. Considering the boom in podcasting, a 6-8% growth rate for the number of published podcasts per year would seem feasible. This fine article by Glenn Leibowitz on Linkedin expresses just why the golden era of podcasting may yet be ahead of us. As analyzed by Clammr, if you listen to Google, the number of searches for podcasts is back on the up, aided in no small part by Serial: 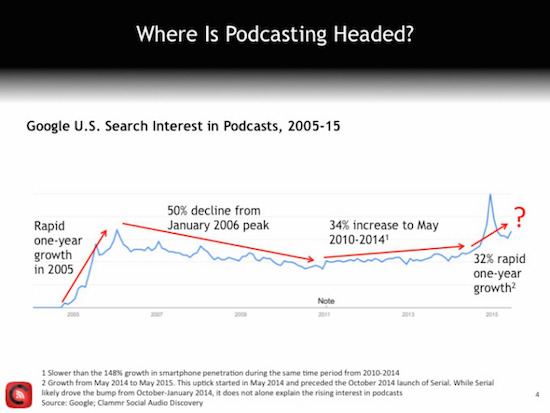 According to a MacWorld article, Apple announced that podcast subscriptions surpassed 1 billion in 2013 across 250,000 unique podcasts in over 100 languages. If you take that number verbatim, that would mean that there are on average 4 subscribers per podcast show. Rather meagre. The key difference between the 250K number Apple announced and the 180,000 I use above is the number of active podcasts (i.e. where shows are still being published). Meanwhile, according to this Washington Post article, the number of unique monthly podcast listeners rose to 75 million per month (in 2013) from 25MM five years earlier. 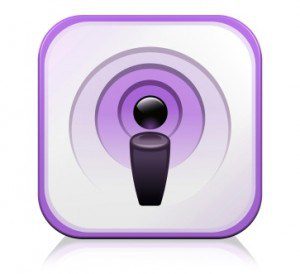 The most popular podcasts…

Using Itunes, there are a few sites that have scraped together some data. For example, Itunes Charts brings out the most popular podcasts by country. Podbay extracts the top ranking podcasts by category. Stitcher has its own listing (with a slightly different set of categories), identifying top movers and shared shows.

The Pew Research Center released its fact sheet on podcasting in April 2015. Using Edison Research, it shows how the number of American listeners has been steadily on the increase, albeit we are still talking just 17% of Americans over the age of 12 have listened to a podcast in the prior month. 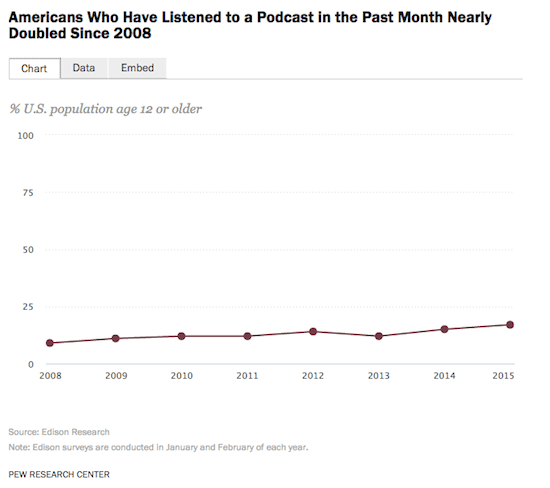 Meanwhile, a 2015 state of the American podcast by radio network Westwood One provided some insights into the listeners. The study found that “Podcast listeners’ median age is 30, versus 45 for AM/FM radio and 57 for broadcast television networks.”{via Adage} On balance, however, it must be said that the available overall podcast numbers and details are quite vague and vary rampantly. The State of the Podcast is, at least anecdotally buoyant. The future of the podcast? Well, that will depend on several things, including quality content that appeals to the audience, a distribution system that is reliable and agreeable and making sure that podcasters find a viable and sustainable economic model.

In a post I wrote in 2012 about the future of podcasting, and was quite optimistic. It seems that my optimism was well suited. The number of podcast shows has blossomed as have the hosting (Libsyn, Buzzsprout, Spreaker, Mixlr …) and streaming / distribution options (Audible, Clammr, Stitcher [now owned by Deezer], Soundcloud…). The famous Serial series brought podcast to mass media levels around world. Attending the Global Editors’ Network event in Barcelona this year, I was happy to meet Dana Chivvis, the producer of Serial, whose first season has had more than 97 million downloads. Serial has now been optioned for a 12-part TV series. A second season of Serial is due out shortly, and will be about the Bowie Bergdahl case.

However, we may well soon be reaching a plateau. Seth Godin wrote a post just this week about how there would be an upcoming glut. As Seth points out, there are some technical challenges to gaining and keeping an audience. First, it is extremely laborious to share a podcast you liked. Secondly, the search and discovery of individual podcasts is not at all easy. That said, the space for great audio content is definitely there. I think that, just like every different type of media, none is perfect, each serves a purpose and each can service a different type of need. There is bound to be some kind of consolidation between all these new startups that have surfaced around podcasting, which will surely shake up the amateurs from the professionals. I am sure that, in the future given the growth, an agency like Nielsen will be able to provide us with greater clarity on the podcast market around the world.

Glad to have your perspectives and/or questions!

*I still like to translate the term “podcast” as a downloadable audio or radio program. Some have coined the term Audioblogging or even (in the Guardian last year), GuerillaMedia. I will stick to podcasting as I believe it will stick for the near-term, despite its techy sound.

Minter Dial is an international professional speaker, author & consultant on Leadership, Branding and Digital Strategy. After a successful international career at L’Oréal, Minter Dial returned to his entrepreneurial roots and has spent the last ten years helping senior management teams and Boards to adapt to the new exigencies of the digitally enhanced marketplace. He has worked with world-class organisations to help activate their brand strategies, and figure out how best to integrate new technologies, digital tools, devices and platforms. Above all, Minter works to catalyse a change in mindset and dial up transformation. Minter received his BA in Trilingual Literature from Yale University (1987) and gained his MBA at INSEAD, Fontainebleau (1993). His newest book Heartificial Empathy, Putting Heart into Business and Artificial Intelligence, bowed in December 2018 and won the Book Excellence Award 2019 as well as being shortlisted for the Business Book Awards 2019. It's available in Audiobook, Kindle and Paperback. He is also co-author of Futureproof (Pearson, Sep 2017) and sole author of The Last Ring Home (Myndset Press, Nov 2016), a book and documentary film, both of which have won awards and critical acclaim. Minter has a new book on leadership, You Lead, published by Kogan Page, that comes out January 2021. View all posts by Minter Dial

I'm Minter Dial and I think of myself as an itinerant bohemian in search of experiences and interesting people. As a metier, I relish being an engaging professional speaker on leadership, transformation and branding with a specialisation in digital transformation since 2009. I'm the author of three award-winning books, including my latest book Heartificial Empathy, Putting Heart into Business and Artificial Intelligence that won the Book Excellence Award 2019 and was shortlisted for the Business Book Awards 2019. My next book on leadership, You Lead, published by Kogan Page, comes out January 2021.